How The Ancestors Saga Was Born

Hello and welcome to my first ever blog post. No pressure!

Well, as some of you may know, last month (February 2017) I published my first book, ‘The Forbidden’, which you can download for free here from Amazon if you haven’t already. The Forbidden is a prequel novella to my planned series of books called the Ancestors Saga.

I’ll start with a little bit about me (don’t worry, very brief!). Like many of you, I have been an avid reader since I was small, my first love being the Chronicles of Narnia by C.S. Lewis and subsequent favourites being the Star Wars novels, The Lord of the Rings, Harry Potter and the Twilight Saga with many others in between.

As you can probably guess from that, I am a hopeless fan of Fantasy and SciFi. I love nature and animals, particularly horses and cats and have a current menagerie of thirteen horses (twelve Arabian and one honorary Welsh pony), a tank of tropical fish (my pride and joy) and two whippets called Freya and Loki, of whom you will probably hear about in upcoming posts as a lot of my inspiration comes from when I’m out walking. Here they are, faces to names. Freya is the fawn (on the right!) and Loki is the blue-fawn parti-colour (on the left!): 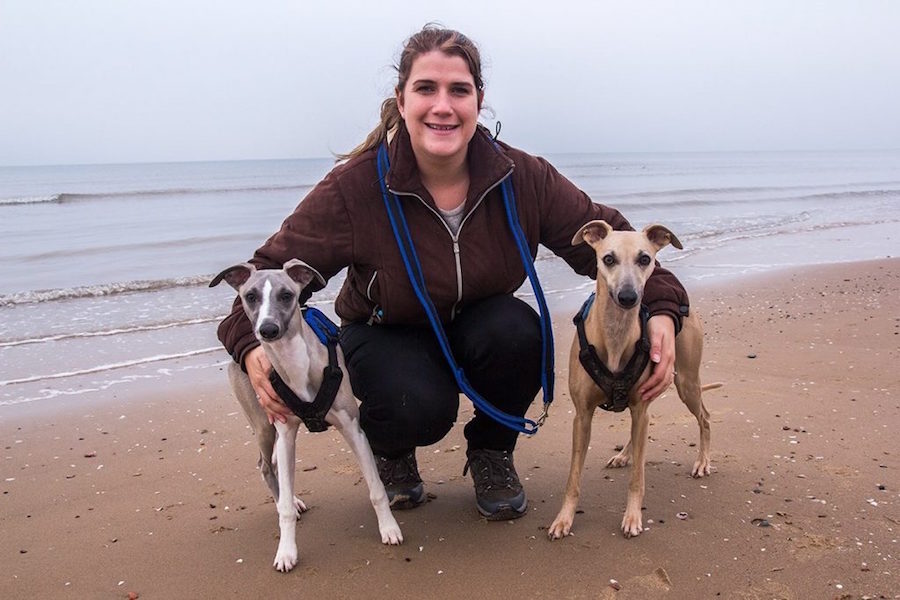 Oh and one husband called Matt! Mustn't forget him because without him, my books wouldn't be getting anywhere. Honestly. He's my secret weapon behind my publishing/marketing plan because his tech head is far superior to mine!

Anyway, enough about me, more about the writing! I am a little unsure of how to go about this so bear with me while I find my rhythm. I thought I might start by giving an overview on how my ideas first came to be and how I came to publish my first book. Here we go.

Writing my own book and getting published have been a true ambition of mine since I was about eighteen. Around this time, I began cutting my writing teeth by writing Star Wars fanfiction stories on various fanfiction sites, but for some reason, my own original idea just failed to make itself known. Try as I might, nothing would come. It was like chasing that proverbial butterfly. As many authors will know, you don't find your idea, your idea finds you. Usually when you're just minding your own business.

If you are an aspiring author and are still looking for that first idea, just wait, it will find you whenever it is meant to. Be patient.

It was Juaan and Nyriaana who found me first, along with their story, and even their ending. I had no world to fit them into, however, I just knew their situation. I tried a few ideas and actually started writing a story for them in quite a different world to the one they inhabit now. It was more of a dystopian setting, I suppose. Still, it was all I had at the time so I played with it.

The idea for what would later become the Achalaja race came from a throw-away comment my mom made one day when we were driving along in the car. She simply said: “what might we have become had we followed a more spiritual path, rather than a technological one.” It got the cogs working. Indeed. The human mind is a powerful thing, probably in more ways than we can ever imagine. I knew then that one of my 'peoples' would be an embodiment of what humans could have been had we not turned our back on nature in pursuit of technology, had we only looked inside, instead of out.

I kept writing on and off but never seemed to get past chapter one, and this was a couple of years now after Juaan and Nyri first came to me. My world just didn't seem to have 'legs'. I wasn't happy with it and it didn't go anywhere.

Again, I was sitting in the car when the solution hit me (I love car rides. If you ever happen to be in the car with me, don't get offended if I don't speak much and just stare out of the window, it's not that I don't want to talk, it's just that my mind has wandered off and has left a 'back soon' note in my head.)

Now, one of my other passions in life is ancient history and prehistory. I'd been interested in reading about all of the new fossil finds being revealed by scientists at the time. Fossils of separate human species that would have existed alongside our own homo sapien ancestors thousands of years ago. That and the fact that DNA testing proved that these species had interbred with homo sapiens at some point and left their distant markers in our own genetic make-up. In the words of Mr Spock: Fascinating.

So there I was, sitting in the car mulling idly over this when everything fell into place with a sudden snap. Juaan and Nyri did not belong in this dystopian world I had been trying to fit them into. They had existed thousands of years ago, as part of a world long lost to us. And just like that, my story came into being. I will probably share more of the research that inspired the story in later posts but I don't want to go on too much here.

I hadn't read or heard of any books set in such an era so I had thought my new idea would be pretty unique. Of course, I have found out since writing my books that this is not the case and there are many books written in a pre-historical time period. I really want to read a few of them but will hold off until I am finished!

I was disappointed by this discovery at first, though I suppose I was a little stupid to think I had stumbled upon an idea that no one else would ever have had before, duh, but still, I picked myself up with the fact that my Ancestors story would be unique in the fact that it would contain beings that had 'power', a fantastical/magical edge to what had once existed.

In my world, I would include species we know, such as ourselves and the Neanderthals (the 'Thals'. Hello, Nen) but also include species that we might not have even discovered yet, those who may have evolved to hone different skills of survival – skills of the mind rather than the hand. Thus the Achalaja were born.

With the world settling into place, I began writing in earnest. Five years later and I had my book, Ancestors, the first of a planned trilogy at about 75,000 words.

As soon as I had Ancestors in my hand, I hastily set about approaching agents with the hopes of getting my new book published. Well, what followed was the usual story of polite rejection letters coming back thick and fast. One agent asked for more and I got my hopes up despite my better judgement, before they, too, said that Ancestors wasn't for them.

Through all this, I kept working on Ancestors. The world and the characters kept getting deeper with each re-write until the word count swelled to over 100,000 words and was all the better for it. Matt and my mom kept suggesting that I should look at self-publishing, but at the time, like many people, I saw this option only as an admittance of failure and as a last resort. Surely people wouldn't see me as a 'real' author if I self-published, would they? So I continued to chase the kudos of being traditionally published because, only then would I feel like I'd made it. And still the rejections straggled in.

I hadn't really given up my pursuit of agents when my attitude was completely changed. Certainly, there were still plenty of promising agents left to approach and I hadn't yet received nearly as many rejection letters as some very well known authors claim to have had before they were first published. But my attitude was changed when I stumbled across a blog on a site called the Creative Penn. Self-published author, Joanna Penn, wrote about how independent publishing can work to a writer's advantage and actually be a far more successful route to take, certainly not the last resort many people, including me, seemed to think.

I was sold. If any of you are looking to publish your first book, please take a look at Joanna Penn's blog post and judge for yourselves: For better or worse, I decided to go down the indie publisher's route. Sure, it would mean lots of work marketing the book myself, but to me, the pros outweighed the cons. Especially for a debut author.

I started researching self-publishing in earnest and enrolled in a self-publishing course by Nick Stephenson, Your First 10,000 Readers. It's brilliantly informative and has taught me a lot on what I need to do.

Oddly, it was this decision to go 'indie' and through Nick's self-publishing guidance, that The Forbidden came into being. I needed something to give to readers, a shorter story to introduce my world. The three original books I had had planned were going to be 100,000 words plus each! I toyed with one idea for a short story but after following the thought for a few minutes, I realised that that story was another full length novel! A novella wouldn't do that tale justice. I filed that new exciting idea away to be pulled out again when I was ready and went back to the drawing board. What would make a good short story? It was then that my thoughts turned to Juaan's mother. What was her story? Rebaa took over then. She wanted her story told. Two chapters in and Nen ran out of the snow just when Rebaa and I needed her to, spear in hand.

The Forbidden flowed out and was born in just one week of furious writing and in its very creation, though it be short, the whole of the Ancestors Saga found its true rhythm. The saga will now encompass five books, The Forbidden, the main original trilogy and that other story, which I still have filed away.

I still have much to learn on my author's journey. I'm sure Ancestors will throw me a few more surprises as I get it ready for a summer release, but I hope I can take you all with me and that we'll have some fun along the way while I share the ups and downs. I will write other blog posts with more detail on certain elements of the story and inspirations, complete with character sketches, scenes, excerpts and deleted scenes. I hope you can join me and enjoy everything I share with you. Feel free to ask questions and share your thoughts below. I will answer as best I can.

Until next time!
Lori