I hope you are all well and enjoying the summer so far. It’s a little bit windy and rainy here in the UK at the minute; not very inspiring, so I thought I’d take some time off writing the next book in the series to write this, my second blog post. I know, I know, it’s been a while. I promise I’ll try to update more often from now on.

Before I go on, just a quick note to say that there is some new content on my website uploaded along with this post. Nen’s character bio is now available for you to read as well as three species bios that I hope you will enjoy. I have also included character sketches, and some conceptual art. They can be found under the ‘World of the Ancestors’ Saga’ tab.

Now on to the main event!

I am very pleased to announce that Ancestors: Book 1 launched as of the 14th July – if you haven’t already, you can grab your copy here. It’s a relief to me to finally have it out there. There have been times when I feared it wouldn’t let go of the apron strings until next Christmas! This was my first big launch and I have to say, it hasn’t been as plain sailing as I’d planned; there have been some bumps in the road along the way.

Ancestors came back from my editor on the 6th June and, after screwing up the courage to read my manuscript appraisal, I looked at Ancestors next to the advice from my editor and have to admit the major thought going through my mind at the time was: ‘how the heck–’. Or at least the close approximation.

I knew what my editor was asking for and agreed with him wholeheartedly but the brain refused to work on the mammoth jigsaw that was before me. It was like it was saying ‘I’ve put it together once, I’m not doing it again! You can get lost.”

This actually continued for about three weeks after receiving the manuscript back. Each time I’d sit down to work on it and each time ‘how the heck–’ was the most genius thing I could come up with. This was a bit of a problem bearing in mind that I had only allotted four to five weeks between the manuscript coming back from the editor and the book actually being launched. And one of the weeks directly before the launch I was supposed to be on holiday in France with my husband’s family, hoping to be enjoying a leisurely week off, knowing my work was done and looking forward to the launch. Er… wasn’t going to happen. As you might imagine, I was starting to sweat just a tad.

It was about a week and a half before launch day that inspiration finally hit. Yes, a week and a half, (I’ll get you back for that one day, muse!), and the last edit of Ancestors has been written in several locations from barbecue parties to the south of France!

Oh, here’s a picture of me and my husband, Matt, canoeing in l’Orb Valley, Roquebrun. It was really fun if you’re ever over that way. Stunning scenery. 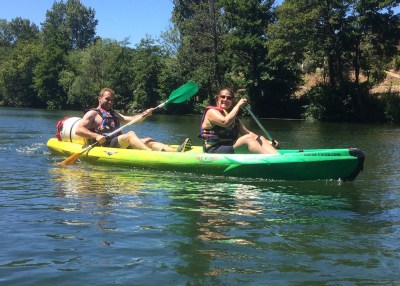 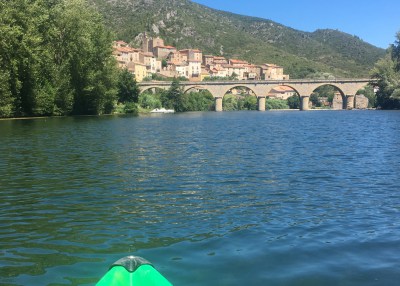 I would also like to take this opportunity to apologise to all the people I was on holiday with for being such an anti-social bum and shutting myself away in our room whenever we weren’t on a day trip or at meal times. I felt really bad and want you to know I’d rather have been relaxing with you all, as I had planned to be doing at that point, than shut upstairs quelling the urge to throw my laptop clean out of the window!

New ideas were still coming to me just days before the launch and, after we got back from France, I put myself under house arrest and was writing for 15 solid hours per day in the race for the finish line. And not only did I have to get Ancestors polished and ready… there was also another project that needed my urgent attention.

Some of you may have already noticed that there is a surprise novella included at the back of Ancestors and ‘Captive’ was only half ready in the run up to launch. No pressure.   This novella came from an idle thought I had one day while out walking Freya and Loki and then I just had to write it. This was about two weeks before Ancestors came back from my editor.   Damn you, idle thoughts! Have you no consideration for deadlines?!

For those of you who may be wondering, this is what I looked like the day before Ancestors went out:

It has all been worth it though, I feel that Ancestors has come out of that last edit stronger than ever with many scenes that have now become some of my favourite moments in the book. A total of 15,000 words have been added in the final edit plus the new 32,000 word novella, Captive. I want to take this opportunity to thank my editor, Jon Curzon, from The Writing Literary Consultants, for his great advice and in making Ancestors the book it is today. 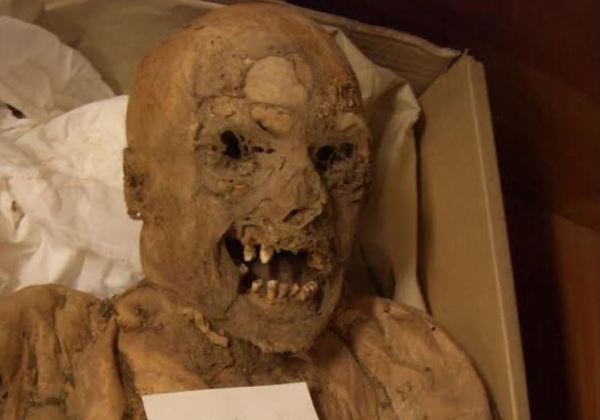 The initial launch went well and on 14th July, Ancestors went live as planned across all platforms after nearly 7 long years of work. However, Ancestors wasn’t finished with me yet.

It had one last heart attack to give me. Just when you think its safe to come out…

My mom had downloaded the book to read and it was about 1am in the morning on the 16th July when she dropped me a text to say she was confused but it seemed there was a paragraph missing in one of the later chapters.

OMG. Matt had to talk me down off the roof that night after so many readers had contacted me to say how they had already eagerly downloaded it. Not sure what happened in the upload but one of my paragraphs from the end of chapter 30 had gone completely AWOL. I was devastated, feeling like I’d let my readers down completely. I corrected the uploaded manuscript immediately and contacted Amazon to request that they inform all readers who had already bought the book that they could refresh their copy with the corrected version.

If you are one of my readers who did download Ancestors before or on the 16th July, please know that you can refresh your copy of Ancestors on your kindles. Failing this, please let me know via email and I will gladly send you an updated copy to download.

After that incident, the discovery of the odd typo is now a dandelion in the breeze!

Phew! What a few weeks it has been.

And so concludes the story of the launch of my very first paid book. A lot of lessons learned. For those of you who have given Ancestors its first few 5* reviews, I thank you from the bottom of my heart.

Work on the next book, Enemy Tribe, has begun, alongside the other book in the series, Raknari. I am going to write these two together simultaneously as I think there will be a lot of ties between the two and feel that each will grow in the telling of the other. I am hoping for a 2018 spring or summer launch for Enemy Tribe.

In my next blog, I will delve into some of the research I have done in the background of the Ancestors Saga, which I hope you will find as fascinating as I.

Until next time, I wish you all the best and happy reading!